By Athleticshouron January 18, 2022in Sports

Ghana is out of the 2021 TotalEnergies Africa Cup of Nations (AFCON) tournament after failing to win a single game in Group C at the end of all three matches.

The Ghana Black Stars tagged as underdogs heading into the tournament aimed to pull a surprise but unfortunately, things have not gone according to plan. Report: Ghana 2 vs 3 Comoros.

The national team of the West African country began their AFCON campaign in Cameroon with a tough match against Morocco.

Despite performing well throughout the game, the Atlas Lions were defeated by the Black Stars by a goal to nil thanks to a late Sofiane Boufal equalizer.

In the second game against a Covid-hit Gabon team, Ghana had a solid chance of winning but again, a late disputed equalizer saw the Stars settling for a 1-1 draw after 90 minutes.

Today, the last round of games in Group C were played with Ghana coming up against Comoros in a must-win game.

Shockingly, the Black Stars had a disastrous start that saw the team trailing through a fourth minute strike from Comoros veteran El Fardou Ben.

With Comoros netting two more through a brace from Ahmed Mogni, the team pipped Ghana with a 3-2 win after an intense game.

On the matchday, Richmond Boakye Yiadom and Alexander Djiku netted the consolation goals for the Black Stars. 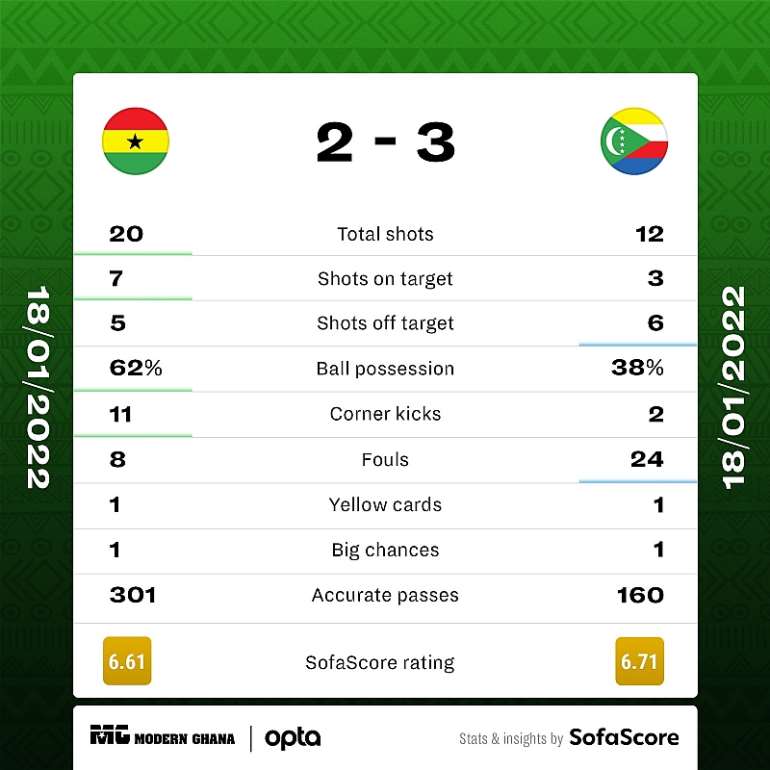 Ghana has been eliminated from the 2021 AFCON after coming last in Group C with only one point. This is the first time Ghana has failed to go past the group stage of an AFCON competition since the 2006 edition in Egypt.

When the next continental spectacle comes along, the 40-year wait for an AFCON country will be extended to 41.

Claiming the TotalEnergies Man of the Match award 🥇

Previous ArticleBreaking News: Ghana Black Stars Out Of AFCON
Next ArticleMy target was to qualify Ghana for the World Cup – Coach Milo