On the sixth and final night of the World Athletics U20 Championships Cali 22, the US 4x400m team was ready to put on a show as the last women’s track final of the competition.

Shawnti Jackson, a 17-year-old from North Carolina, showed complete determination as she took the baton from her teammate Mekenze Kelley and launched into the second leg of the relay. She made closing the gap behind Germany and Canada look easy, and then she broke ahead, finishing almost 10 metres ahead of the field and laying the groundwork for USA’s Akala Garrett and Roisin Willis to bring the team an exciting runaway win.

Shawnti’s father and coach, Bershawn Jackson, cheered from the stands. Bershawn knew exactly what Shawnti’s success meant – not just because he is his daughter’s coach, but because he was once in her shoes.

“The blessing is this: I made the World U20s team 20 years ago. And then 20 years later, my daughter is running at the U20 Championship,” he said. “I think that’s every parent’s dream.”

Bershawn’s career shone with gold by the time he retired in 2018. ‘Batman’, as he was known on the track, took bronze in the 400m hurdles and gold in 4x400m at the 2002 World U20 Championships in Kingston, Jamaica when he was 19 years old. Over the course of his career, he went on to win the 2005 world 400m hurdles title along with three world 4x400m gold medals and an Olympic bronze in his specialist event.

“Right now, I’m just trying to create a name for myself,” Shawnti said. “So I’m not just Batman’s daughter.”

The pressure to create her legacy is strong. After her record-breaking run over 60m, the attention had built to exhausting levels for Shawnti. Fans were asking for autographs and pictures with a persistence she hadn’t experienced before. At Shawnti’s state championship meet, Bershawn noticed his daughter struggling to adjust to her new fame.

“She had a bad meet, and I was upset. And she was like, ‘I’m just so overwhelmed’,” Bershawn said. “She was just a 16-year-old kid. I think that’s the first time I’ve seen her really stressed.”

Shawnti had to fight off her nerves once again before the 100m heats at the World U20 Championships, her first time competing on a global stage.

When the gun went off, Shawnti leapt out of the blocks with the field, full of energy. Then the gun fired again. The crowd gasped. Bershawn watched from his seat near the finish line, his eyes wide and his palms pressed together in front of his mouth, waiting for the false start call.

On the second start, Shawnti charged forward and qualified easily in the first heat by matching her personal best, 11.28.

“The false start kind of ramped up my nerves a little bit, because I just wanted to get this out of the way so bad,” Shawnti said. “But after that, I just felt calm.” 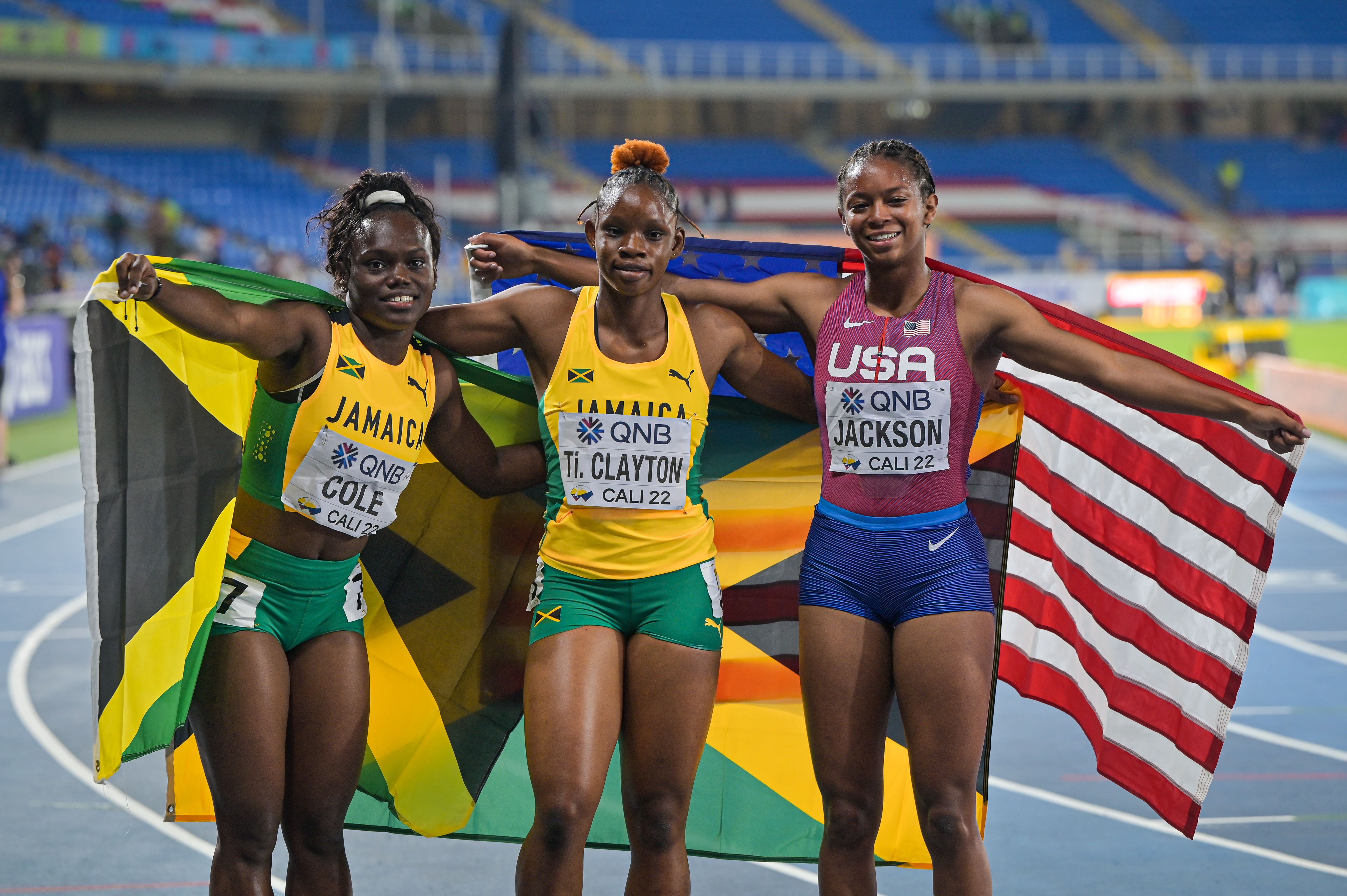 Shawnti had high expectations for the championships, even in comparison with her dad’s history. She found confidence.

“I expect my experience to be somewhat better than his. Because he ran in 1990-something – no, I’m joking,” she said, teasing with a grin. “But he ran a long time ago. And now we’re different. I expect it to be faster, and more entertaining.”

But for Bershawn, it’s less about the competition of their careers. He wants his daughter to fully understand how remarkable it is that she is competing with the best in the world.

He wants it for her because he barely understood it himself when he was her age.

“When I arrived in Jamaica and I had my USA kit on, I didn’t know the significance behind it,” Bershawn said of his experience at the 2002 World U20 Championships. “For my daughter, I try to tell her, ‘Enjoy the moment. This is the highest platform you can get to as a high school kid. It gets no bigger than the U20 Worlds.”

Shawnti followed her individual 100m bronze with silver in the 4x100m. And after her stellar breakaway lead on the final night of the championships in the 4x400m, she got her first gold medal. Bershawn and all of the US team cheered for the relay quartet at the top of their lungs.

When Shawnti and her teammates gathered at the finish line together, they collected their flags from their coaches and celebrated. Bershawn hugged Shawnti briefly before she was rushed to the side of the track for pictures with the medallists.

Caught up in the chaos of arranging their flags, taking pictures and being shepherded along for interviews, the US team looked disoriented. They glanced warily at the open track but tried to pay attention and follow the directions of competition officials. Was there time for a victory lap?

Bershawn noticed their questioning glances. He jogged his way back down through the stadium to reach the lowest point of the stands, closest to the track, where he leaned over the railing. He cupped a hand over his mouth to speak to the young athletes. They needed time to enjoy this moment.

“Y’all take a lap,” Bershawn ordered, gesturing an arm to the track and giving a curt nod of his head. “Y’all earned it.”

How to Compete in Paris 2024 Olympic Marathon for Free